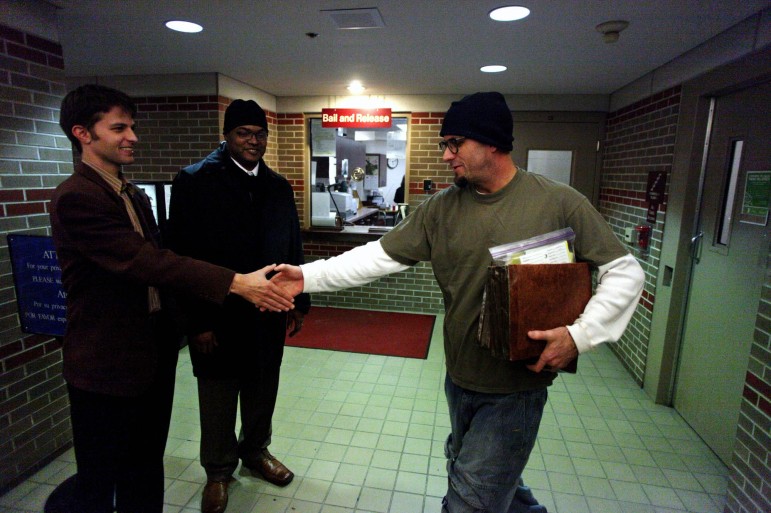 Forest Shomberg, right, walks to greet his attorney Byron Lichtstein, left, and law student Peter Middleton, center, both of the Wisconsin Innocence Project whose efforts were successful in overturning Shomberg’s conviction on Nov. 13 in Dane County Circuit Court in Madison. Shomberg had served more than six years in prison for a sexual assault that new DNA evidence indicates he did not commit. WISCONSIN STATE JOURNAL/CRAIG SCHREINER

A few cells of skin left on the clothing of a sexual-assault victim were the key to freeing Forest “Woody” Shomberg from his cell at Columbia Correctional Institution last month.

The Madison man served six years of a 12-year sentence before a powerful new form of DNA testing called “touch DNA” found that, while unknown male DNA was found on the woman’s clothing where she had been violently groped in a dark alley, Shomberg’s was not.

When he was freed Nov. 13, Shomberg, 45, became the ninth Wisconsin prisoner whose conviction was overturned at least in part on the strength of DNA test results, according to a review of the state’s online court database and cases examined by the Wisconsin State Journal and the Wisconsin Center for Investigative Journalism.

To date, about one-third of the post-conviction DNA testing in Wisconsin has resulted in a conviction being overturned, the review found, with several cases still pending.

That number could grow as the Wisconsin Innocence Project embarks next year on an 18-month $647,000 federally funded project to identify potential DNA exoneration cases and officials scramble to collect DNA profiles from 12,000 convicted felons discovered missing this fall from the state’s database.

Nationally, the New York City-based Innocence Project estimates that at least 245 people wrongfully convicted of murder, rape and other crimes have been released since 1989 at least in part on the strength of DNA evidence.

“While these (DNA) cases demonstrate that tragic mistakes can be made, the system allows us to acknowledge and correct those mistakes,” said John Pray, co-director of the Wisconsin Innocence Project.

There is no central database of postconviction DNA cases in Wisconsin. The Wisconsin Center for Investigative Journalism commissioned Court Data Technologies of Madison to examine 10 years’ worth of electronic circuit court records to locate cases in which Wisconsin prisoners requested post-conviction DNA testing.

Of the 35 cases in which post-conviction DNA testing was sought:

• Twenty-three test requests were granted by judges, while 12 were denied.
• Eight of those requests resulted in overturned convictions, while one prompted a reduced sentence.
• At least one request yielded results that implicated the prisoner.
• In another case, DNA evidence collected pretrial played a key role in overturning the murder conviction of a man whose appeal attorneys successfully argued his trial lawyer should have presented DNA test results excluding the man.

Details of cases in which prisoners were freed (download Word file).

Three of the nine convictions overturned by DNA evidence in Wisconsin were in Dane County. In addition to Shomberg, Ralph Armstrong was released this summer after nearly 30 years in prison for a murder that DNA and other evidence suggests may have been committed by his now-deceased brother. And Anthony Hicks was freed in 1997 after about five years in prison when DNA testing revealed that hairs purportedly connecting him to a 1991 rape weren’t his.

Post-conviction DNA testing also provided a break in a Milwaukee serial killer case. Chaunte Ott was released in 2008 based on DNA test results that showed the unknown male DNA found on a young woman he was convicted of murdering also had been found on two other murder victims killed while Ott was in prison

Seven of the nine vacated convictions occurred after 2001, when Wisconsin passed a law requiring that prisoners claiming innocence be allowed post-conviction DNA testing under certain circumstances.

The law also requires that biological evidence be preserved in criminal cases until all people convicted in the case have completed their sentences. Wisconsin has been using DNA testing in criminal cases since 1995, said Jerome Geurts, director of the state Crime Laboratory in Madison.

A prosecutor who was a leader in advancing the use of DNA evidence said the law is working as intended.

“It does just what it was designed to do,” said Norman Gahn, a Milwaukee County assistant district attorney who served on a national DNA task force chaired by Wisconsin Supreme Court Justice Shirley Abrahamson.

“It gives convicted offenders who believe that they were wrongly convicted the opportunity to prove their innocence through DNA testing.”

Scott Walker, a former Republican state representative, was one of the champions of Wisconsin’s DNA law. Walker said the bill started out as an effort to extend the statute of limitations in rape cases to allow prosecutions made possible by the growing database of DNA profiles. He said provisions requiring biological evidence preservation and postconviction DNA testing under certain conditions were added at the request of the Innocence Project.

“We felt if it was good enough to nail a criminal for committing a crime, it should be good enough to be used for someone who hadn’t,” said Walker, now the Milwaukee County executive and a Republican candidate for governor.

“Whether it’s proving someone’s guilt or someone’s innocence, in either case, it keeps us safer because if somebody is innocent, that means somebody who’s guilty is still out there, and we can use that evidence to get them off the streets.”

Attorneys for the Innocence Project, housed at the University of Wisconsin Law School, praised the law but said it can’t detect all wrongful convictions.

In a “significant number” of cases, biological evidence has been discarded, lost or never collected, making DNA testing impossible, said Keith Findley, co-director of the project and president of the national Innocence Network. Most of those cases predate the 2001 law, he said.

In other cases, judges have used too high of a standard in denying inmates the chance to test biological evidence, believes Innocence Project attorney Byron Lichstein. Under state law, a judge must permit post-conviction DNA testing where it is “reasonably probable” that the person would not have been convicted had exculpatory DNA evidence been available at trial.

Lichstein said some Wisconsin judges have cited “overwhelming” evidence of a person’s guilt in denying testing. He said such a standard can make qualifying for testing impossible since all convictions are supposed to be based on guilt “beyond a reasonable doubt.”

“The point of the statute is, if there’s a chance the testing can prove innocence, you do the testing,” Lichstein said. “It’s not an issue of saying, ‘Well, this guy looks really, really guilty, so we’re not going to allow testing.’ “

DNA just one part of puzzle

Despite its power, DNA evidence doesn’t always offer a clear picture of a crime. Geurts said testing has become so sensitive that DNA profiles of people who have nothing to do with an incident can turn up.

“With increasing sensitivity and increased swabbing of crime scenes, we are getting a lot of extraneous profiles,” Geurts said.

Even DNA results that exclude the person convicted of the crime sometimes aren’t enough to persuade a judge to order a new trial.

That’s what happened to David Bintz. Post-conviction testing detected none of his DNA on a partially clad woman found murdered in Brown County 10 years ago. Bintz had acknowledged calling the victim, a bartender, and threatening her for allegedly overcharging him, but he had insisted he didn’t kill her.

A judge refused to overturn Bintz’s conviction, saying the semen from an unknown man found on the victim could have come from consensual sex before the murder – a fact the jury knew before convicting him. The state Court of Appeals agreed, refusing to order a new trial.

“It’s not always enough to say it isn’t our guy’s DNA,” Pray said. “Sometimes, you have to identify the person’s whose DNA it is.

Fredric Saecker of Sparta attends a ceremony Oct. 23 in Madison honoring the 10th anniversary of the Wisconsin Innocence Project. Saecker is thought to be the first Wisconsin prisoner exonerated by DNA testing. WISCONSIN STATE JOURNAL/CRAIG SCHREINER

DNA exonerates man ‘in the wrong place at the wrong time’

Fred Saecker figures he’d still be in prison today if his mother hadn’t paid for DNA testing.
In 1996, Saecker was released in what is believed to be the first DNA exoneration in Wisconsin.

Saecker was convicted in Buffalo County Circuit Court in 1989 of sexual assault, kidnapping and burglary. The victim and her husband both said Saecker wasn’t the assailant, and no physical evidence tied him to the crime in Bluff Siding in which a stranger attacked and kidnapped a woman from her home.

Saecker even had an alibi – a time-stamped receipt from a cash machine at the time the crime was committed.

But Saecker, a drifter and heavy drug and alcohol user, had been picked up by a trucker in the area, reportedly with blood on his clothes. After his arrest, Saecker made false incriminating statements to other jail inmates to “get them off my back.”

It was a mistake that cost him seven years of his life.

Even after DNA testing excluded him as the source of semen found on the victim, prosecutors fought Saecker’s release, but a judge let him out. In 2001, Saecker successfully petitioned for the maximum compensation under state law for wrongful conviction, $25,000.

Saecker, 59, now lives in Sparta and drives a forklift for a living.

“I just happened to be in the wrong place at the wrong time,” he said.