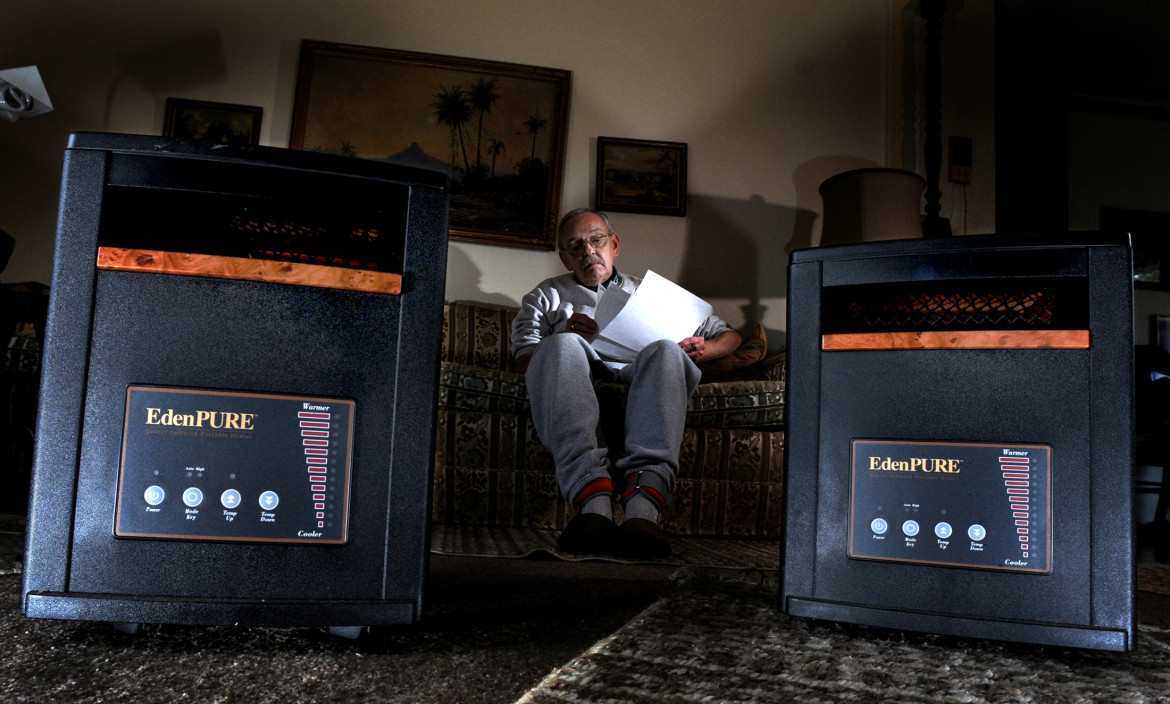 Jack Brennan had purchased two electric heaters hoping to save money on his heating bill. The heaters, not being used, are collecting dust because of the high cost of running them. Monday, December 7, 2009.

To file a complaint

Complaints regarding any product in Wisconsin may be filed with the Department of Agriculture, Trade and Consumer Protection by calling  800-422-7128 or filing an online complaint.

Electric heaters, which have long been a bad deal for most people trying to lower their energy bills, are an even worse deal in Wisconsin this winter because of falling prices for natural gas.

But that doesn’t stop manufacturers of electric heaters from using newspaper and Internet ads — some of which feature home-repair guru Bob Vila and pictures of Amish craftsmen — to attract buyers by promising big savings.

Jack Brennan, 70, of Green Bay, bought two $350 EdenPURE electric heaters after seeing an ad that vowed to “cut your heating bill by up to 50 percent.”When his next bill came from Wisconsin Public Service, it was three times higher than normal.

“I almost died,” Brennan said. “A gal from (Wisconsin) Public Service called me and she said, ‘What are you doing? What did you buy?’ When I told her I bought two of those heaters, she said, ‘Well, you just answered the question.’ ”

“If you read the ad, we say ‘save up to 50 percent,’ ” said Michael Giorgio, general manager of Suarez Corp. Industries, parent company of EdenPURE, whose heaters are endorsed by Vila. “And really, we’re unique because we put so much copy in our promotions, because we believe in telling you all the features and benefits about how to use the heater in the ad. We’re a company that’s been in business for 40 years so if you don’t like it, we certainly will take it back and we’ll pay the shipping.”

Chris Pugh, multimedia communications specialist with Heat Surge, whose ads for electric fireplaces feature Amish-made wooden mantles, said in a statement that the heaters “when used in conjunction with zoned heating allows you to heat selectively and save money. According to the U.S. Department of Energy, zone heating can produce energy savings of more than 20 percent. In addition, the fireplaces use about 9 cents of electricity an hour on the standard setting. They come with a limited full-year replacement or money back warranty less shipping plus a 30-day satisfaction guarantee.”

Spokesmen from four Wisconsin utility companies and the state Focus on Energy program confirmed they often get inquires about electric heaters, with people thinking they are a way to save money.

No complaints related to the heaters have been filed with the state Department of Agriculture, Trade and Consumer Protection, according to spokesperson Donna Gilson.

The Better Business Bureau has received 281 complaints about Heat Surge LLC in the past three years. During that period, the BBB received 299 complaints about Suarez Corp. Industries. All complaints were either resolved or closed. The companies are based in Canton, Ohio.

Wisconsin utility officials estimate around 10 percent of residents, most of them apartment dwellers, use electricity as their sole heating source.

“Beware what is being promised,” cautioned Brian Manthey, spokesperson for We Energies. “If you think you’re going to heat your whole house with these things and save money, that’s highly unlikely.”

People who use a space heater and turn down their thermostat will likely see savings on their natural gas bill, but their electric bill could skyrocket.

“For most people, the only way you really could save what the ads claim is to let your house go cold for most of the winter and just carry your heater everywhere you go,” Beers said.

Consumer Reports has reported that to save 50 percent by using a space heater, residents would have to lower their thermostats by about 17 degrees.

Kraus said zone heating — keeping the majority of your house cold and using a space heater in a small, closed-off area — is the only way to save money with electric heaters, which is exactly what the manufacturers recommend. Kraus added that he turns on a space heater in one room of his home in the morning while leaving the rest of his house under 60 degrees.

William Acker, a Green Bay energy efficiency engineer and former president of the Wisconsin chapter of the Association of Energy Engineers, said his late father bought one heater and saw his electricity consumption increase 85 percent.

“What got me the most about this electric heater is it’s preying on our elderly people,” Acker said. “When they read ‘50 percent savings,’ they immediately believe it. My dad did.”

Beers said the expensive heaters that Brennan and Acker’s father bought produce no more heat than a $30 space heater you can find at any hardware store.

One thought on “Buyer beware: Electric heaters may not live up to money-saving claims”