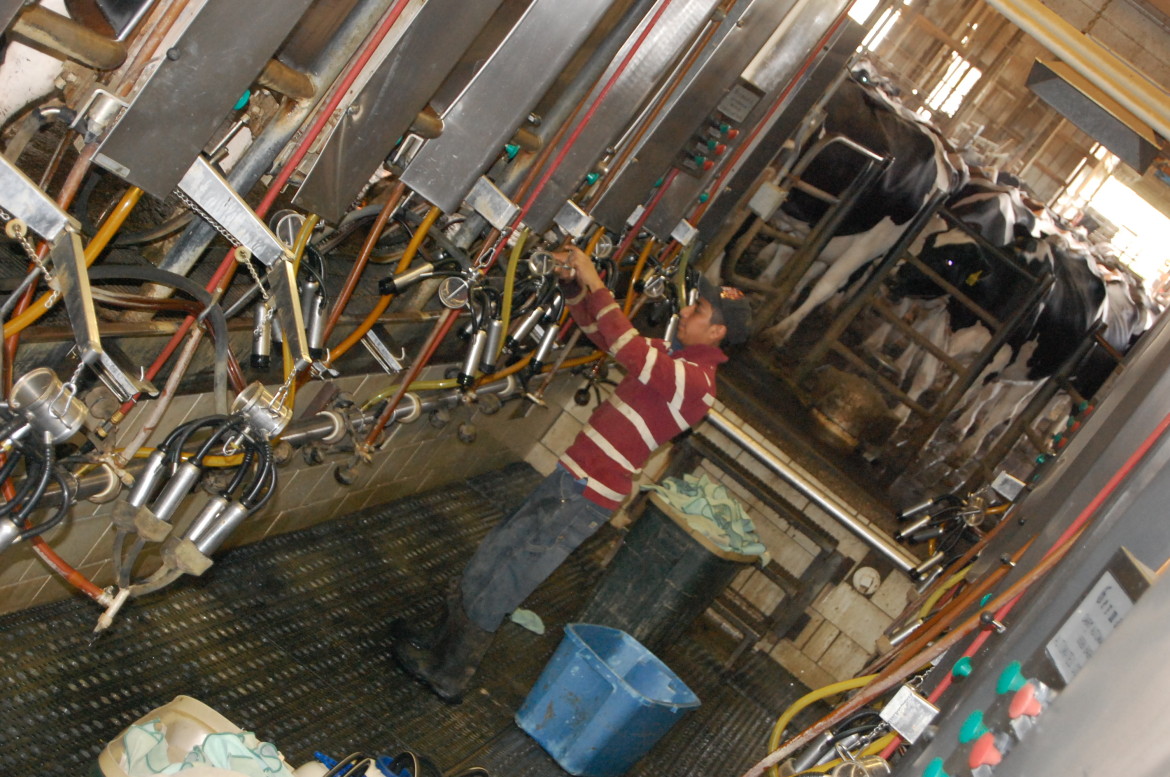 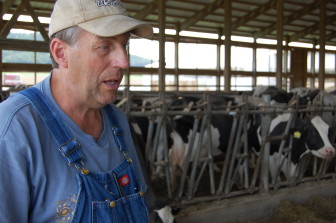 Dairy farmer John Rosenow says immigrant workers are "so much more capable than what we could find before" with local workers. WCIJ/ROBERT GUTSCHE JR.

Like many Wisconsin dairy farmers, Tim Servais needed help and he reluctantly faced the facts.

After he expanded his farm operation outside La Crosse in 1995, Servais relied on local adults, teenagers and farm kids to do what work he couldn’t handle himself.

“I’ve always tried to hire people who were local so I had some background on them,” Servais said.

About three years back, Servais found the locals had stopped coming to his barn door. “I just couldn’t find people to do the work,” Servais said.

But he found Spanish-speaking foreigners eager to take their place. “I tried not to go that way because I didn’t know how it was going to work out,” he recalled.

Now immigrants do much of the field work and almost all of the milking for his 240-cow dairy herd.

Servais is one of a growing number of Wisconsin dairy farmers relying on immigrants to milk their cows and keep their farms running smoothly.

Just 10 years ago, 5 percent of workers on Wisconsin dairy farms were immigrants — but by 2008, that number jumped to 40 percent, or more than 5,000 workers, according to a 2009 study by the UW-Madison Program on Agricultural Technology Studies. Those immigrants are changing the face of the state’s signature industry, while bringing increasing diversity and social challenges to the state’s rural areas.

As Wisconsin dairy farmers hire more immigrants, they face mounting pressure to ensure their workforce is competent, skilled, and above all, legal. Experts say farmers are often caught in a “don’t ask, don’t tell” web of federal employment regulations, with a strong incentive to know as little as possible about the legal status of their workers. The UW-Madison study didn’t inquire about immigration status, but earlier federal surveys have estimated that half of all immigrant crop workers are working in the United States illegally.

Servais remembers a time when the children of dairy farmers used to work on the farm, learning the ropes with the goal of one day inheriting it as their own.

Those days are disappearing for many families. Servais said farmers today simply have fewer children, and the remaining children don’t always share the traditional vision of taking on the family business.

It’s not hard to understand why children are choosing to go to college or pursue other industries over farm work.

Unsure of the aspirations of his own three children and in need of more workers after expanding his farm a few years back, Servais turned to local high school students, but found them generally unreliable in a business that requires timely and skillful milking at unusual hours.

“There are all kinds of people that want to come around and work, but it’s to their convenience,” Servais said. “It’d be Friday evening and they call at 5 o’clock and they’re supposed to be there at 5 o’clock – ‘I’m not going to make it tonight, something came up.’ Well you know what came up, something more fun than working.”

Servais said local teenagers come by his farm wanting work for the summer, but after spending a day in the parlor and seeing how messy and physically grueling the work is, most soon quit.

In need of a workforce he could depend on and afford, Servais turned to immigrants, and he now employs three of them.

“They don’t get paid a lot now, but that’s one thing I’m working on is paying them more because I really appreciate the fact that they’re helping me out, and they’re very good,” Servais said.

Servais is just one of many dairy farm owners increasingly relying on immigrants to keep operations running smoothly.

“We need them to milk cows or we’d barely be in business,” Loren Wolfe, co-owner of a 575-cow dairy farm near Cochrane, said of the Hispanic immigrants he employs.

The need for immigrant workers is exacerbated by low milk prices, as farmers depend upon cheap labor to remain profitable. Wolfe’s business partner, John Rosenow, estimated the pair would have to pay native workers twice the rate his Hispanic immigrants are willing to work for – $7.25 an hour, according to one of their immigrant employees.

Rosenow, who employs eight Hispanic workers, said even if he could find local workers who were dedicated to farm life, the increased salary costs would bankrupt his business.

Plus, Rosenow said, farmers hire immigrants because they are “excellent,” hard workers. In fact, they are “so much more capable than what we could find before” with local workers.

While locals are hard to find, immigrant applicants are numerous.

Sandi Zirbel, co-owner of a 635-cow dairy cooperative outside of Green Bay, said the influx of immigrants is evident in her company’s staff.

Zirbel said immigrants frequently come looking for work, and as many as 19 out of 20 applicants are immigrants. Two-thirds of those applications get tossed.

“Some of them simply just don’t fit into the system, either because of how much they’re asking per hour or what their experience is,” Zirbel said. All workers start at $7.50 per hour — but usually receive a raise to $8.50 after six months and are eligible for yearly raises thereafter.

Despite the number of applicants who are rejected, it’s easy to find enough qualified workers to fill the need at Zirbel Dairy Farms: Seven of the current nine farmhands are immigrants.

“They’re more likely to seek this type of work,” Zirbel said. “Why somebody would want to leave Mexico and come to Wisconsin to milk in the middle of winter, I don’t know … but there’s a lot of them up here.” 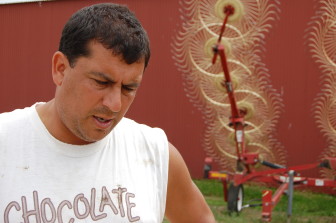 Tim Servais used to employ locals to milk cows on his mid-sized dairy farm in Vernon County near Stoddard. Now he hires immigrants to fill the spots, because locals no longer come around looking for work. WCIJ/ROBERT GUTSCHE JR.

Although dairy farm owners go through the same legal hiring process as all employers, many say the process is complicated by the assumption many Hispanics are undocumented, meaning they don’t have the proper work visas or have come to the United States illegally.

“In my opinion there is a high percentage of undocumented labor that is being used in dairy farms,” said Erich Straub, a Milwaukee attorney who specializes in deportation defense. Straub said because of contradictory immigration laws, it is in the best interest of farmers not to know if their workers are illegal.

“See no evil, hear no evil, speak no evil. I don’t think they want to know,” Straub said. “I think they’re in a very difficult position where they have a need for labor, they have a declining labor pool in their community … it’s a very challenging environment for farmers to run a business.”

While most farmers will tell you they follow the rules, Straub said the larger problem is employment law is vague enough to allow some undocumented workers to slip through the cracks.

Undocumented immigrants often evade the issue by guessing at a valid number, or by paying someone to provide them with a Social Security number of an eligible worker, immigrants and experts said.

Employers must examine a worker’s identification documents and make a good faith decision as to their validity. The confusion arises with the notion of “constructive knowledge,” which states that employers who have an indication an employee may not be eligible must take further steps to ensure their eligibility or terminate the employee. This constructive knowledge could arise from a document that looks false, a “no-match” letter, or even overhearing the worker say a visa expired.

“Dairy farmers,” he said, “are freaked out because their situation is such that, while they might not know that any particular person is legal or illegal, they know statistically that if they have 15 dairy workers … statistically the chances are that some don’t have genuine documents. There’s this fear.”

Rosenow, the Cochrane farmer, said the constructive knowledge provision gives farmers an incentive to know as little about the legal status of their workers as possible.

“If a reasonable person could look at the documents and would make the assumption that they’re legit, then you accept them,” Rosenow said. 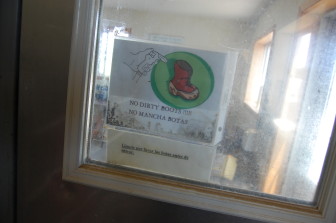 E-Verify and the future of hiring

While dairy farmers admit it is possible undocumented workers slip through, they maintain they do everything within their power to ensure their own employees are documented. Not everyone is so sure.

U.S. Rep. Jim Sensenbrenner, R-Wis., is sponsoring a bill to require employers to use E-Verify before hiring.

But many say E-Verify is inconvenient, unreliable and will only make hiring workers more difficult. “I don’t see the downside of the system we’re using now,” Rosenow said.

“I know that there are accuracy problems with the database,” Straub said. “Sometimes those problems are exaggerated by some people who don’t want E-Verify. On the other side of the coin, I think E-Verify is promoted as some magic bullet that’s going to fix the immigration problem in the United States. The truth is probably somewhere in the middle.”

While she’s one of the few using E-Verify, Zirbel disagreed with the assumption farmers are trying to manipulate the hiring process to benefit from cheap and illegal labor.

“I would like to assure anybody who doesn’t know anything about dairy farming that we’re doing everything possible to legally hire (immigrant workers),” Zirbel said.

“It’s peace of mind,” Zirbel continued. “We do our job to make sure we have all the right documentation. Whether or not they give us the right information, that’s really out of our hands.”

Coming Nov. 11: A delicate existence: A look into the life an undocumented Mexican family, working and living on a Wisconsin dairy farm.

Editor’s note: This special report on Wisconsin’s growing reliance upon immigrant dairy workers is a joint project of several media organizations, including The Country Today, a weekly newspaper focusing upon agricultural and rural issues, and the nonprofit Wisconsin Center for Investigative Journalism (www.WisconsinWatch.org). The Center collaborates with its partners — Wisconsin Public Radio, Wisconsin Public Television and the UW-Madison School of Journalism & Mass Communication — and other news media.