"My goal has been to teach the (immigrant) children there's something better for them to do than what their parents are being forced to do because of the economy," Iowa County resident and bilingual volunteer Martha Boyer, left, told attendees at a Rural Immigration Summit sponsored by the University of Wisconsin-Extension. Dodgeville School District English language teacher Michelle Meier, Darlington police Sgt. Tony Ruesga, Voces de la Frontera executive director Christine Neumann-Ortiz and Iowa County dairy farmer Dan Patenaude joined Boyer for a panel discussion on Oct. 17 in Dodgeville. WCIJ/KRYSSY PEASE

DODGEVILLE — Rapid increases in the Latino population of Wisconsin’s rural areas are reshaping work, school and social life, but also are raising concerns that Spanish-speaking immigrants are often isolated and mistrusted, experts and residents said at an event aimed at fostering better connections between newcomers and long-time residents.

“I think a good part of the reason is because we’ve created a system that doesn’t encourage them to be a part of our society,” Patenaude said. “We can’t fix international problems in Dodgeville but maybe we can work on this community problem. We can find whatever ways we can to assist the foreign workers to participate in the community or to feel as comfortable as they can day in and day out going about their daily business.”

The event at Plymouth Congregational Church was sponsored by University of Wisconsin-Extension. Similar events were held in other parts of rural Wisconsin in 2007 and 2008.

Wisconsin’s Hispanic population was heavily concentrated in the urban, Southeastern parts of the state in 1990, but now is increasingly dispersed in rural areas. Iowa County experienced a 262-percent increase in its Latino population from 1990 to 2007.

The impact on the workforce of the state’s dairy farms is dramatic. A decade ago, immigrant workers held 5 percent of the jobs on Wisconsin dairy farms. Now the figure is 40 percent, according to a survey by the UW-Madison Program on Agricultural Technology Studies.

Iowa County resident Kent Mayfield helped organize the event after attending one of the previous summits and noticing changes in the makeup of his community over the past several years.

“I wanted to find an opportunity for the community to learn from each other, to build awareness, to become more sensitized,” Mayfield said.  “I wondered what we could do in our own community to change the quality of life for the people with whom we are living and for ourselves as well.” 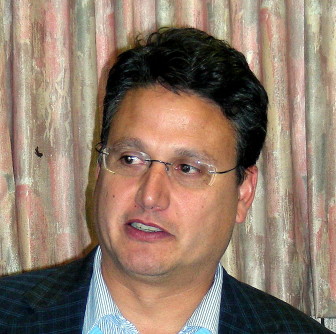 Rep. Pedro Colón, a Puerto Rican immigrant and Democrat from Milwaukee, discussed the frustrations he’s faced regarding immigration policy. This year, the Legislature passed a law that makes some undocumented students eligible for in-state tuition. But the Legislature rejected a measure from Colón that would have allowed undocumented residents to obtain a driver’s identification card.

“The issue that’s being ignored today is the part about our laws,” Langer said. “These people broke the law and did not play by the rules, and that is a source of a lot of anger.”

After some debate, Paul Ohlrogge, a community resource development agent at UW-Extension in Iowa County, steered the panelists back to discussing immigration in Southwestern Wisconsin.

Mayfield and several people interviewed after the event said it succeeded in bringing immigrants out of the shadows.

“These people are not going to go away,” Mayfield said. “If we keep them in this invisible, isolated situation, we won’t gain from the opportunity they afford us and they won’t gain from us. It will be a win-win if we can find the mechanisms for bringing them into our community, and that’s what I hope people got out of today.”