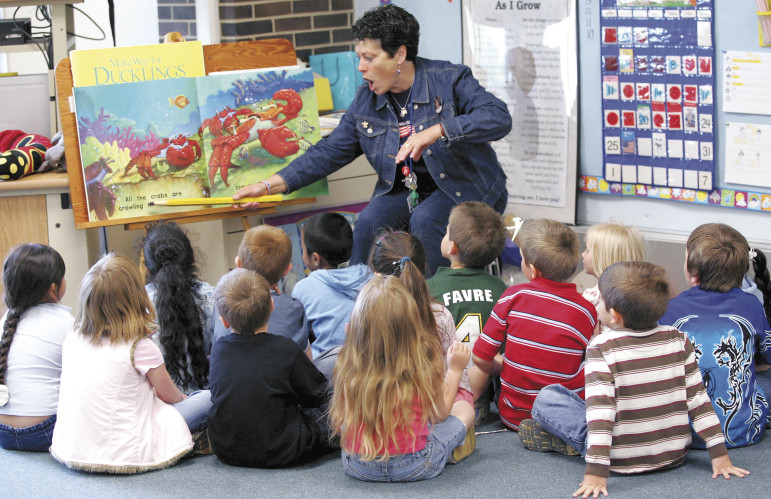 Madison Elementary kindergarten teacher Kathie Koebler reads the book “Splash in the Ocean” to her Janesville School District students in May. Some of the students have never had a book read to them before they got to the school. Photo Courtesy of THE JANESVILLE GAZETTE

Nearly four in 10 Wisconsin elementary students qualified for free or reduced-price lunch last school year, and the proportion of low-income elementary students has climbed every year of this decade, according to state Department of Public Instruction data analyzed by the Wisconsin Center for Investigative Journalism.

The proportion of low-income students doubled or more than doubled in 47 of 411 public school districts during the period, reflecting the toll of the worsening economy and what some experts call a growing threat to education in Wisconsin.

More than 90 percent of the growth in the low-income elementary student population since 2000 occurred outside of Milwaukee, the Center’s analysis found.

State Superintendent of Public Instruction Tony Evers, the state’s top education official, said he expects the number of low-income students, which last year included more than 160,000 elementary students and an additional 132,000 in higher grade levels, will continue to grow for another year or two. Job losses in Wisconsin have led to a near doubling in the past year of the statewide unemployment rate, now at an estimated 8.7 percent. 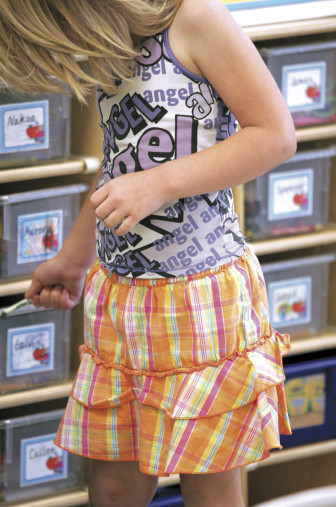 A kindergarten student in the Janesville School District puts materials away in her cubby at Madison Elementary School in May. Since 2000, the school's low-income population has doubled. More than half of its students are eligible for subsidized lunches. Photo Courtesy of THE JANESVILLE GAZETTE

The expansion of low-income student populations comes at a time when districts across Wisconsin are facing a 3 percent overall cut in general state aid, and sharper cuts in some schools, which may force leaders to reduce services and increase class sizes. Yet low-income students often need more attention in school to compensate for a lack of academic support and distractions caused by financial problems at home, national research has shown.

“Children who come from impoverished backgrounds, especially if they become poor because their parents are losing their jobs … that creates more stress on a family, more dysfunction in a family,” Evers said. “Sometimes in these economic times the schools are the best refuges … it’s one of the places where we need to make sure we nurture kids well when their families are hurt by job loss.”

Although free and reduced school lunch enrollment is frequently used to gauge the size of low-income student populations, experts caution that many things influence that number, including how aggressively schools recruit students for the program and the stigma often associated with receiving assistance. That stigma is less prevalent among younger children, experts say, so the Center based its analysis on subsidized-lunch enrollment in the lower grades in the 411 districts and 12 southeastern Wisconsin charter schools with elementary students.

“I don’t think there’s any question that low-income students present a tremendous challenge, financially, academically, coming into the schools,” said state Sen. John Lehman , D-Racine, chair of the Senate Education Committee, who taught in the Racine School District for 20 years.

“You’re looking at more and more challenged families, and those students really absorb resources,” Lehman said. “In my long experience teaching in the schools, I can tell you that it’s tremendous work on the part of school districts. Your school district becomes the substitute in many cases where the kids have not gotten boosts at home.”

The National School Lunch Program provided $114.4 million in subsidies and $25 million in food for lunches at public and private schools in Wisconsin during the 2007-08 school year, the most recent period for which figures are available.

Milwaukee had the third-highest proportion of students in the program, with 79 percent of its elementary pupils eligible for subsidized lunches last year.

Adam Gamoran, director of the Wisconsin Center for Education Research, a federally funded center at the University of Wisconsin-Madison, said an increase in low-income students places a very real burden on schools. Students from middle- and upper-income families typically receive more educational support from their parents — such as help with homework and educational trips and activities — than students from low-income families. When there are more needy students, the burden of providing that attention may shift to the teacher, he said.

“Having books, a stable family environment, a place to study, having supplies, good nutrition — all of these are material factors in the home environment that help kids with more economic advantages do better in school,” Gamoran said. “If you have an increasing proportion of students without such material advantages, then that makes it more challenging to be successful with those students in schools.”

Barb Keresty, a reading instructor at two Madison Metropolitan School District elementary schools, said low-income students often require special attention because they’re not read to as much at home. For example, in Madison’s Reading Recovery program last year, 86 percent of the students qualified for free or reduced price lunch. In all, 46.9 percent of elementary students in the district were enrolled in the free and reduced lunch program — up by nearly half since 2000.

“That’s one thing that really puts kids at a disadvantage — you have to be read to before you get to school age, ” Keresty said, adding that parents under “duress” often lack the time or energy to read to their children. “It really always comes back to poverty, basically. It doesn’t mean those kids can’t be successful. It’s just that that’s the population of kids that many times are struggling.”

Evers said he believes schools will adjust to the fact that a growing number of their students come from families who are financially on the edge.

“Teachers are teachers because they love helping children, and they’re just not going to turn their back on people,” Evers said.

Among the children getting subsidized lunch is 7-year-old Diamond Smith. She isn’t a fan of school lunch — she prefers her mom’s home-cooked enchiladas to the “nasty” mac-n-cheese lunch at Elvejhem Elementary School in Madison. 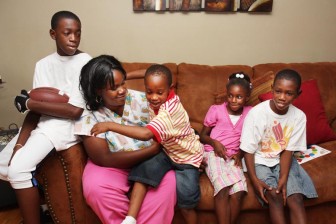 But for her mother, Iesha Smith, the school lunch program keeps Diamond and her three other children well fed — and ready to learn in school. Smith, who makes $15,000 a year as a full-time nursing assistant, said she doesn’t consider herself low-income but still can’t stretch her paycheck far enough to pack lunches every day.

“It (subsidized lunch) helps out because these are hard times for people,” she said. “You can’t afford taking lunch to school every single day, especially when you’ve got multiple kids like I do.”

In Janesville, the proportion of elementary students eligible for the subsidized lunch program increased sharply from 26 percent to 40.9 percent since 2000. That trend is likely to continue as the full effect of the layoff of 1,200 employees from the shuttered General Motors assembly plant are felt. Subsidized lunch data are collected each October, meaning that last year’s number doesn’t fully reflect the layoffs at GM, where most workers lost their jobs in December. Janesville now has the third-highest unemployment rate among Wisconsin cities at 14.1 percent — double the rate from July 2008.

Said Hallenbeck, “We’re looking to new ways to do that kind of supporting.  We’ve got to become more creative and innovative to meet those needs.”

The increased reliance on the lunch subsidies matches other indicators that child poverty in the state is growing. The percentage of Wisconsin children living in families below 200 percent of the poverty line — $42,054 for a family of four with two children — has increased in recent years to an estimated 34 percent in 2007, the most recent year available, according to the Annie E. Casey Foundation, a charity that tracks child well-being. This school year, a household of four earning $28,665 or less would qualify for free lunch. Families earning $40,793 or less qualify for reduced-price lunch.

In the Green Bay School District, the proportion of students in the subsidized lunch program was up by half since 2000, and included 56.9 percent of elementary students.

“Families are calling like crazy right now because they can’t afford school supplies for their children,” Alison Draheim, coordinator of at-risk programs who works with low-income families in the Green Bay district, said as the school year got under way. “A lot of working families that were maybe able to handle that expense in previous years this year are not able to.”

Although she believes school can be a refuge for children from impoverished families, Draheim said there are some problems schools can’t fix.

“It’s hard to focus on algebra when you’re hungry or other kids are looking at you because you smell,” she said. “It impacts children socially, emotionally which always has an impact on their academics.”

While the number of low-income students continues to grow, financial pressures are making it hard for some districts to find the money to support them. The newly approved state budget cuts general school aids by an average 3 percent this school year, but about one-fourth of the districts face at least a 15 percent reduction, according to DPI figures. To make up for the lost money, schools must reduce services or raise property taxes — a difficult move in tough economic times.

“What it’s going to mean is fewer services for children, higher class sizes, poorer quality education in the state of Wisconsin,” Turner said. “Our educational system is becoming less and less adequate for dealing with our students.”

Although state aid is declining, federal help for schools with low-income students is on the way in the form of $148 million in stimulus funding for Title I, which funds reading programs and other help for struggling students. But Turner said the funding won’t save Wisconsin schools over the long term. He said the additional federal aid is a temporary boost, likening it the government offering to pay the telephone bill of a family whose home is in foreclosure.

“When you’ve got a huge budget deficit … you can’t use this Title I money to save the regular classroom teachers that are being laid off or the programs that are being cut,” Turner said. “It’s very frustrating for local school districts to get this money channeled through one area of expenditure.”

Said Evers: “We’re certainly appreciative of federal money, but it’s not a permanent solution. Somehow that hole will need to be filled.”