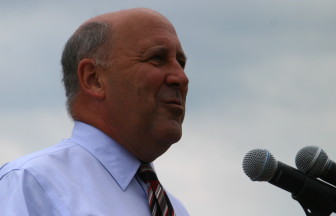 The race for the governor's office is wide open following Gov. Jim Doyle's announcement that he will not run for re-election. ALEX MORRELL/WCIJ

Republicans hoping to reclaim the governor’s office in next year’s election will have to overcome shifting patterns of voter turnout, particularly in rural areas won by Democrats in the 2008 presidential election and 2006 governor’s race.

More than two-thirds of the counties that handed victories to Republican President George Bush in 2004 shifted to support Democrat Barack Obama last year, giving Obama a double-digit victory in a state that in recent years has been one of the nation’s battlegrounds, data and interviews show.

Voter turnout in last year’s presidential election decreased between 2 and 11 percentage points in Wisconsin’s 72 counties, compared to the 2004 presidential election, according to an analysis by the Wisconsin Center for Investigative Journalism. The analysis is based on vote tallies from the November election and state estimates of voting-age populations. 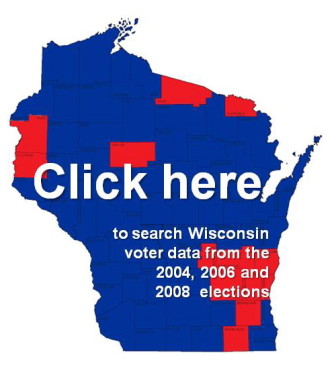 Some of Wisconsin’s rural areas, traditionally fertile ground for Republicans, saw the sharpest declines in turnout in 2008. Many of those same counties backed Democratic Gov. Jim Doyle in his 2006 re-election.

The findings raise two big questions in the wake of Doyle’s Aug. 17 announcement that he won’t seek re-election in 2010:

Leaders of the two state parties say that despite Democrats’ dramatic gains in 2008, the Wisconsin gubernatorial race is expected to be among the most hard-fought in the nation. It will mark the first election for governor without an incumbent since 1982.

The reduction in voter turnout statewide was somewhat unexpected, some political observers said. Sixty-nine percent of Wisconsin’s voting-age residents went to the polls in 2008, compared to 73 percent in 2004. Charles Franklin, a professor of political science at the University of Wisconsin-Madison, said he was expecting a “massive” turnout given the “long, long lines” in some communities among those voting before Election Day.

The lower turnout “is a little surprising given the historic nature of the election, the polarization of the election, the incredibly intense coverage and the feelings that went with it,” agreed Steven Davis, a political science professor at Edgewood College in Madison. “And my take on that decrease is that it was disaffected Republicans who didn’t come out to vote for the most part.”

Political observers attributed the state’s lower 2008 turnout to Republicans who, uninspired by the ticket led by Sen. John McCain or resigned to an Obama win, stayed home. Obama beat McCain 56 percent to 42 percent in Wisconsin, a decisive win compared to the 0.4 percentage point victory Democratic Sen. John Kerry eked out against Bush in 2004.

However, Davis noted that last year’s 69 percent turnout was more typical for a presidential election in Wisconsin than the 2004 turnout.  About 67 percent of voters cast ballots in 2000 and 58 percent in 1996, according to the state Government Accountability Board, which oversees elections.

David Wegge, a political science professor at St. Norbert College in De Pere, agreed, saying, “The fact that we had the significant turnout in 2004 that went up substantially, it’s maybe not surprising that it dropped a little bit.”

Where did the voters go?

The Center’s analysis found voter participation decreased by between 8 and 10 percentage points in 12 rural counties in 2008, while the largest reduction of 11 percentage points was in Menominee County, a Democratic-leaning county where turnouts historically are low. Marquette University political science professor John McAdams said it could be a case of larger statewide Democratic trends overshadowing local, rural cultures that may more closely identify with a Republican ideology. McAdams said the phenomenon is known as political “cross pressure.”

Dueling political ideologies in Wisconsin may be evident in the dramatic shift in counties from Republican to Democratic in 2008. In 2004, 45 counties went for Bush. Last year, McCain won just 13 counties.

One of the most significant changes was in Brown County, which traditionally has voted Republican. The county voted for Bush by a 10-point margin, 54-44, in 2004. Last year, the county including Wisconsin’s third largest city, Green Bay, flopped, backing Obama by a 9-point margin, 54-45.

Directors of the state Republican and Democratic parties said they believe Wisconsin will remain competitive both in 2010 and the next presidential election in 2012.

Mike Tate, chairman of the Democratic Party of Wisconsin, said it’s too early to determine whether the momentum from last year’s election will carry through to 2010.

Republicans say despite the lopsided defeat of McCain in 2008, they’re optimistic.

“Republicans will be well-positioned to take back the governor’s office next year,” Republican Party of Wisconsin Chairman Reince Priebus said, adding the party will emphasize a mix of state and national issues including job growth and “controlling health care costs while maintaining consumer choice.”

Tate said while some Republicans stayed home in 2008, many Democrats did as well. He said in the weeks before the November election, Wisconsin was no longer considered a swing state, and many Democrats presumed Obama would win anyway.

“I think you had a national mood that was virulently anti-George Bush and that was heavily concerned about the economy … combine that with the fact that the Obama campaign ran a very local, grassroots-based operation,”  Tate said.

Republican Party of Wisconsin Executive Director Mark Jefferson acknowledged there was an “enthusiasm gap that was undeniable between Obama supporters and McCain supporters.” He agreed with Tate that lower Republican turnout could be explained by Wisconsin’s shift from battleground status late in the race and growing concerns nationally about the economy and the federal bailout of the U.S. financial system.

“When the national mood soured, it soured in Wisconsin as well,” Jefferson said. He said the McCain camp began reducing campaign efforts in Wisconsin about three weeks before the election. “They still put in an effort, but it wasn’t an all-out effort as anticipated.”

Whether Wisconsin’s gubernatorial election could hinge on national issues such as the economy and health-care reform or local concerns such as property taxes and job loss is a subject of debate.

Franklin believes Obama’s perceived successes or failures at the national level could help or hurt whoever runs for governor. If the economy rebounds or tanks, either side may try to claim credit or assign blame, he said.

“With Doyle out of the picture, there’s more room for Democrat and Republican nominees to make references to the national picture,” Franklin said. “This sort of national influence affects public opinion here in the state.”

“When you look at the history of elections (in Wisconsin), this (non-presidential election) is the year that people vote locally,”  said Dobyns, a Walker supporter.

No permanent majority for Democrats

Jefferson cautioned that Wisconsin has a recent history of switching parties when one becomes too powerful. Right now, Democrats hold the governor’s office and both legislative houses. Tate labeled last year’s double-digit victory for Obama in Wisconsin more of an “anomaly” than a permanent realignment of voter sentiment.

“Getting control of government in Wisconsin is one thing; maintaining it for any length of time is another thing,” Jefferson said. “Wisconsin voters have been reluctant to give one party sole control for very long.”

Predicted Dobyns: “It’s going to be an interesting, interesting 15 months for the people of Wisconsin.”

The Wisconsin Center for Investigative Journalism’s 2008 estimated statewide turnout of 69 percent and its county-by-county calculations include all adults, regardless of citizenship, because more detailed non-citizen estimates aren’t available by county.

The Center’s analysis is based on county vote totals from the state Government Accountability Board’s elections division and voting age population estimates from the state Demographic Services Center. A searchable database of voter turnout and results for 2004, 2006 and 2008 by county is available at www.WisconsinWatch.org.

The U.S. Census Bureau calculated Wisconsin’s 2008 turnout at 71 percent when noncitizens, who aren’t eligible to vote, were excluded.

Nationally, the Census Bureau said, voter turnout remained the same from 2004 to 2008, at 64 percent. According to the agency, Minnesota ranked first in voter turnout in 2008, followed by Washington, D.C. Wisconsin tied for third with New Hampshire and Maine.