The offer by Rep. Bill Kramer (R-Waukesha) comes after a collaborative report on Doyle’s failure to properly document his spending. Doyle has declined to answer questions on the travel policy.

“I remain concerned both about Governor Doyle’s record keeping and the seemingly lavish travel arrangements,” Kramer said in a statement Thursday. “As a CPA, I am more than happy to help them establish best practices on record keeping, accounting, and travel procedures. Hell, I’ll even travel coach.” 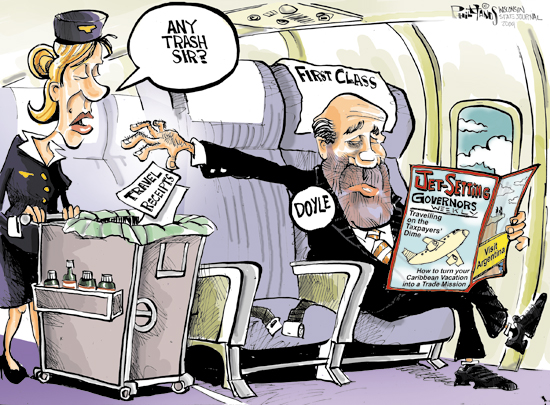 Kramer has needled Doyle on the issue since the report was published, the Journal Sentinel reported.

The reporting by the Center and the newspaper has also provided fuel for editorials throughout the state over the past weeks, including this editorial cartoon by Phil Hands, which ran in the Wisconsin State Journal and other state newspapers.

The cartoon is published here with permission.